PAN AM was a huge airline with many thousands of employees spread all over the world.

How did PAN AM create such a unique family feeling despite being such a big air carrier and such a unique corporate identity with their employees and as a brand?

„I can only speak for FA’s but I think the fact that we worked for the most part with the same crew members for the entire month did a lot to foster the idea of family. You got to know people as people not just a uniform. That was missing in my next airline experience and I think that made the difference. I also think going out on layovers eating and shopping or sightseeing molded us.“

„PAA really was unique in its ability to create that family feeling. The diverse employee profile was unmatched early on. I have never felt that way about any other employer.“

Why did those working with PAN AM felt like being part of the PAN AM family?

How did PAN AM achieve this over decades and generations of employees? 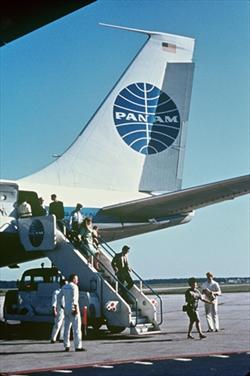 What we experienced as PanAmers, and how PAN AM took care

I remember back in the good ole‘ PAN AM days when I was trying to get home to NYC from Miami, when the best airline ever in the World oversold a MIA to JFK flight instead of making us all find a corner to sleep for the night, they pulled out a 727 just to get us folks back home. It was only a handful of people, maybe a dozen or so and we were mostly standby airline employees but they did not care…they wanted us all to get home! We did not get a meal on board that night flight, but we didn’t care because we knew that they saw people as people and not like some sort of commodity like United and American.

She discribes some interesting details in her Memoirs.

How PAN AM hired its staff worldwide

Are you a PanAmer? Do you know more?

Kindly let us know Your story and how you became a PAN AM employee.

PAN AM’s grooming standards in the 1980s until 1991 which – as usual in those days – has set the standards for the whole airline industry. Many airlines followed the dark blue new PAN AM color (Adolpho design) and still use similar uniforms up to now (e.g. LH).