The History of PAN AM's Berlin Base and German Services In the early post-war years, the Western Allies including U.S., Britain and France set up commercial air links to and from West-Berlin, linking it  to  West-Germany and the world beyond. During the dramatic Berlin Airlift (“Berlin Blockade”)  from 1948 to 1949 the PAN AM predecessor was the only private carrier operating.

Get to know more about this amazing and unique aviational history here...

Official PAN AM time tables and destinations of its Berlin Services 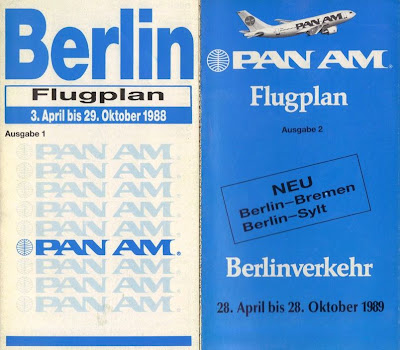 The Story of PAN AM's most famous Captain in Berlin

PAN AM "Blue Ball" for their News.

Official State Visits to Berlin operated by PAN AM crews

See and read more about official state visits executed by PAN AM to Berlin here...

PAN AM Crew Training in 1988 in Berlin
At the left above image: Sigrid Stiglmair (now living in California), Flight Service Director (Berlin I.G.S.)

When PAN AM started to hire male cflight attendants in Berlin beginning of the 1980s... it was made public in German newspapers.

PAN AM Airbus A-300 at Berlin's Tegel airport flying to Frankfurt.

This type was also in service from Miami to San Jose, Costa Rica.

Due to the urgent need for additional cockpit and cabin crews for its new Berlin services Lufthansa offered PANAMers to work for them. PAN AM’s German based cabin crews and ground personal mainly accepted and started working for Lufthansa, but hardly PAN AM cockpit crews did. PAN AM cabin crews just got a short three week training (crash course) and then started for the German carrier. 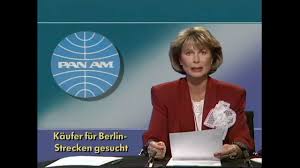 PAN AM's "blue ball" on German news to sell its German base and routes in 1990 (please see right).

The result of this agreement was PAN AM's orderly “Good-Bye” from its IGS airsystem after starting it 1950 with about 70 million passengers within Germany until 1991.

PAN AM continued operating its daily non-stop JFK (New York) to Tegel flights (A-310) with New York based crews until Delta Air Lines assumed most of its remaining transatlantic scheduled services during 1991.

PAN AM’s well skilled personal in air and on ground became part of Lufthansa’s Berlin and later intra-European operations, some changed to long haul flights at the Frankfurt base.

Even though many quit their jobs with Lufthansa the next few years, there are still PANAMers working for Lufthansa  as Pursers or regular flight attendants still often recognized as ”PANAMers” when even after many years they sometimes mix up their PAN AM evacuation commands during their “refreshment” trainings on Lufthansa mock-ups at its Frankfurt main training hub. Some of them started as safety instructors for training new flight attendants at Frankfurt.

PAN AM Express ATR-42 at Sylt airport,  Berlin based until 1991 when PAN AM Express was taken over by TWA which closed operations then at Berlin's Tegel airport. Please read more here... 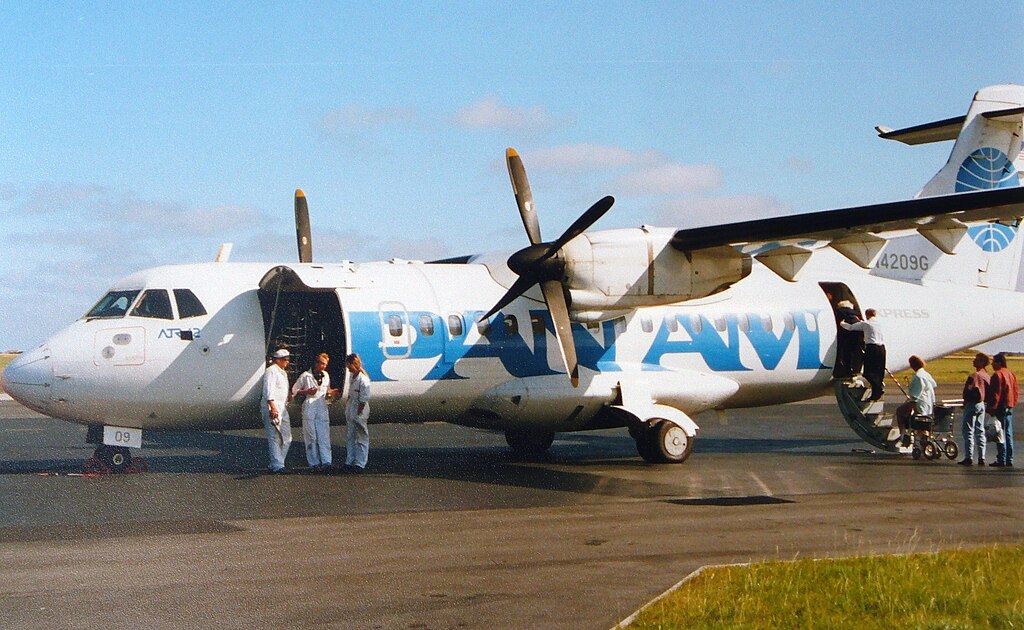 PAN AM Express, which was not included in PAN AM's IGS sale to Lufthansa, continued operating all of its German and internatio- nal scheduled routes from Tegel as an independent legal entity until its acquisition by TWA in 1991. Following TWA's takeover of PAN AM Express, the former PAN AM Express Berlin operations were then closed.

PAN AM's Berlin base (IGS) operated until 1990 with more than 70 million passengers between West-Berlin and West-Germany on scheduled services. Berlin based crews operated also PAN AM charter flights over a period of decades to many European desti- nations like Antalya, Izmir, Dalaman, Mallorca, Heraklion, Canary Islands, and even beyond like Kuwait and many more.

Berlin based cockpit and cabin crews also substituted PAN AM's other European bases with crews like from London-Heathrow to Oslo, Norway, or from Zurich to Geneva, Switzerland, and Istanbul, Turkey, when there was a need (also with "unexpected overnights").

PAN AM's IGS people were well experienced. Some were based with PAN AM in New York (JFK) before like e.g. Annelie Santucci or worked for other airlines before like for Aero America, Air Berlin USA or Singapur Airlines.

Air Berlin USA was a Berlin based U.S. charter carrier founded by the former PAN AM pilot Kim Lundgren in 1978. He started with a Boeing 737. After reunification of Germany Air Berlin USA was transformed into the German carrier Air Berlin and after merging with the German LTU became the second largest German and seventh largest European airline.

After 1990 some German based PAN AMers started working for other airlines like for Air Berlin or Airline of the Americas in Florida which was also founded by a former PAN AM pilot in 1991 and later sold.

Even though many are still working for Lufthansa and other airlines like Delta Air Lines, United Airlines (e.g. in London) after PAN AM's IGS routes were sold to it in 1990, they still keep their PAN AM identity up to now and reunite at least twice a year in Berlin.

PAN AM IGS crews operated until step-by-step take over on Lufthansa behalf from 1990 to 1991 within Germany. PAN AM's 727 was also in regular use by London LHR, Belgrade, Warsaw and Istanbul based crews for Intra-European flight like to London, Paris, Zurich, Geneva, Oslo, Istanbul, Ankara, Athens, Ljubljana, Budapest, Zagreb, Belgrade until 1991.

...read more here (will be installed)