PAN AM Flight Schedule including PAN AM Express (1991) 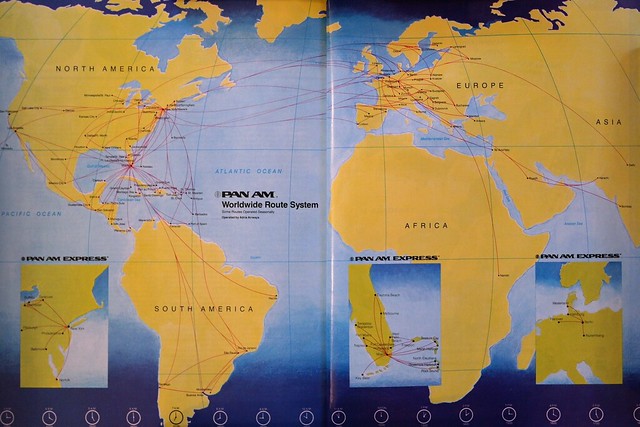 Delta Air Lines purchased the remaining profitable assets of Pan Am, including its remaining European routes (except one to Paris from Miami), and Frankfurt mini hub, the Shuttle operation, 45 jets, and the Pan Am Worldport at John F. Kennedy Airport, for $416 million. Delta also injected $100 million becoming a 45 percent owner of a reorganized but smaller Pan Am serving the Caribbean, Central and South America from a main hub in Miami. The airline’s creditors would hold the other 55 percent.

The Boston–New York LaGuardia–Washington National Pan Am Shuttle service was taken over by Delta in September 1991. Two months later Delta assumed all of Pan Am’s remaining transatlantic traffic rights, except Miami to Paris and London.

In October 1991 former Douglas Aircraft executive Russell Ray, Jr. was hired as Pan Am’s new president and CEO. As part of this restructuring, Pan Am relocated its headquarters from the Pan Am Building in New York City to new offices in the Miami area in preparation for the airline’s relaunch from both Miami and New York on November 1, 1991. The new airline would have operated approximately 60 aircraft and generate about $1.2 billion in annual revenues with 7,500 employees.[110] Following the relaunch, Pan Am continued to sustain heavy losses. Revenue throughout October and November 1991 fell short of what had been anticipated in the reorganization plan, with Delta claiming that Pan Am was losing $3 million a day. This undermined Delta’s, Wall Street’s and the traveling public’s confidence in the viability of the reorganized Pan Am.[111][114]

Pan Am’s senior executives outlined a projected shortfall of between $100 million and possibly $200 million, with the airline requiring a $25 million installment just to fly through the following week. On the evening of December 3, Pan Am’s Creditors Committee advised U.S. Bankruptcy Judge Cornelius Blackshear that it was close to convincing an airline (TWA) to invest $15 million to keep Pan Am operating. A deal with TWA owner Carl Icahn could not be struck. Pan Am opened for business at 9:00 am and within the hour, Ray was forced to withdraw Pan Am’s plan of reorganization and execute an immediate shutdown plan for Pan Am. Over 9,000 employees lost their jobs. As a result of this action, Delta was sued for more than $2.5 billion on December 9, 1991 by the Pan Am Creditors Committee.[118] Shortly thereafter, a large group of former Pan Am employees sued Delta.[114] In December 1994, a federal judge ruled in favor of Delta, concluding that it was not liable for Pan Am’s demise.[119]

Pan Am ceased operations on December 4, 1991 following a decision by Delta’s CEO, Ron Allen, and other senior executives not to go ahead with the final $25 million payment Pan Am was scheduled to receive the weekend after Thanksgiving.[111][120] As a result, some 7,500 Pan Am employees lost their jobs, thousands of whom had worked in the New York City area and were preparing to move to the Miami area to work at Pan Am’s new headquarters near Miami International Airport. Economists predicted that 9,000 jobs in the Miami area, including jobs at companies not connected to Pan Am that were dependent on the airline’s presence, would be lost after it folded.[120] The carrier’s last flown scheduled operation was Pan Am flight 436 which departed that day from Bridgetown, Barbados at 2 pm (EST) for Miami under the command of Captain Mark Pyle flying Clipper Goodwill, a Boeing 727–200 (N368PA).[111][114][121]

Pan Am was the third American major airline to shut down in 1991, after Eastern Air Lines and Midway Airlines.[120]

After serving only two months as Pan Am’s CEO, Ray was replaced by Peter McHugh to supervise the sale of Pan Am’s remaining assets by Pan Am’s Creditor’s Committee.[122] Pan Am’s last remaining hub (at Miami International Airport) was split during the following years between United Airlines and American Airlines. TWA’s Carl Icahn purchased Pan Am Express at a court ordered bankruptcy auction for $13 million, renaming it Trans World Express.[123] The Pan Am brand was sold to Charles Cobb, CEO of Cobb Partners and former United States Ambassador to the Republic of Iceland under President George H.W. Bush and Under Secretary of the U.S. Department of Commerce under President Reagan. Cobb, along with Hanna-Frost partners invested in a new Pan American World Airways headed by veteran airline executive Martin R. Shugrue, Jr, a former Pan Am executive with 20 years of experience at the original carrier.[124]

In his book, Pan Am: An Aviation Legend, Barnaby Conrad III contends that the collapse of the original Pan Am was a combination of corporate mismanagement, government indifference to protecting its prime international carrier, and flawed regulatory policy.[125] He cites an observation made by former Pan Am Vice President for External Affairs, Stanley Gewirtz: