Pan Am dominated the airline industrie over decades. What Pan Am inaugurated, invented and started most airlines sooner or later applied for their own airline.

So why did Pan Am’s decline begin?

Here do you find some historical research and articles on this issue and what we can learn out of it.

Based on New York Times article and research 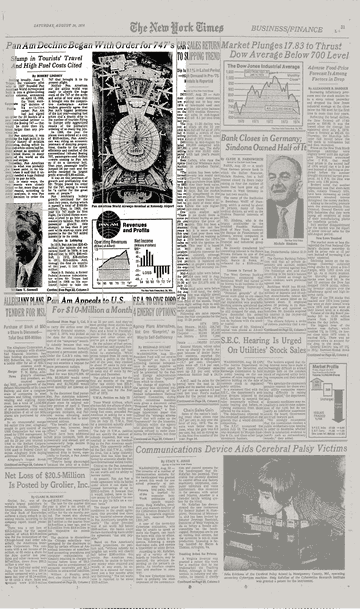 Smiling broadly, Juan T. Trippe, the visionary pilot who in 1927 founded Pan Amerlcan World Airways and built It into a globe‐circling airline colossus, announced on April 13, 1966, the most exciting” decision of his aviation career. Pan Am had just signed an order for 25 models of a new wide‐bodied jetliner —called the Boeing 747 — that would be more than 2½ times larger than any previous jet.

For Pan American, it was probably the high point In its 39:year history of aviation pioneering, during which its blue‐and‐white colors had become almost as symbolic of the United States in many parts of the world as the stars and stripes.

Yesterday, Pan American came to what was probably the lowest point in its history; when it said that it urgently needed a huge Federal subsidy to pay Its bills.

And, in many ways, the two events were closely linked — for, more than any other reason, according to many analysts, it was Pan Am’s decision to order the 747 that brought it to its present plight.

Neither Pan American nor the airline world was ready to absorb the huge costs of the 747 or the acres and acres of new seats that it brought into the competitive marketplace. Airline leaders generally agree that Pan Am’s biggest problems of the last year—soaring fuel prices and a drastic drop in the number of tourists flying to Europe only aggravated results of the premature ordering of so many big jets.

In 1966, the year the planes were ordered at a cost of $525‐million, Pan American was riding an economic jetstream of dizzying proportions, thanks to the speed, efficiency and comfort of the conventional 140‐seat Boeing 707, passengers—and dollars —were coming to Pan Am as if on a conveyor belt. That year, passenger traffic jumped 24 per cent and the airline recorded its largest profit ever—$71.95‐million.

It was on this jetstream of growth and profitability that Mr. Trippe placed his order for the 747, saying it would be “a carrier for the great mass of people.”

Pan Amrican’s bubbly growth continued for the next two years, during which it earned a total of $109.69‐million. Then, in 1969, the year the 747 made its first flight, the United States economy started to go into a recessionary tailspin. Pan Am’s passenger growth rate slumped to less than 3 per cent while start‐up costs and payments for the 747 added massively to its costs.

Najeeb E. Halaby, a former Federal Aviation Administrator whom Mr. Trippe had picked in 1968 as his successor; failed to take the management action necessary to solve the airline’s troubles before he was ousted as chief executive officer 31 months ago.

Meanwhile, Pan Am had other problems. In 1969, the Civil Aeronautics Board allowed five more airlines to fly between the mainland and Hawaii, cutting into a route that Pan Am had profitably shared with United and Northwest.

One of Mr. Halaby’s longsuits was expected to be knowing his way around Washington. But his lobbying failed to achieve Pan American’s long‐term goals—such as domestic United States routes that the airline surely needed to feed its extensive network of international, routes.

Passenger traffic — especially on the company’s keystone routes between the United States and Europe—never rebounded to the growth rates of the mid‐nineteen‐sixties except for brief periods stimulated artificially by cheap and profitless fares.

It was largely the 747 that stimulated a jungle‐like profit‐sapping competitive brawl among international airlines, especially over the Atlantic. Illegal kickbacks to high‐volume travel agents became commonplace as rival lines clawed at one another to fill empty planes.

The glut of unused seats over the Atlantic—and on other routes— made it difficult for the airlines to raise rates to profitable levels.

When Pan Am and other airlines received their 360�seat 747’s, they sold many of the smaller jets to cut‐rate charter airlines, which charged half the standard fare for a trans‐Atlantic ticket. Often openly violating Federal charter flight eligibility requirements, charter lines siphoned off much of the tran-Atlantic market, keeping a further downward pressure on fares.

On the North-Atlantic alone, Pan Am collided with more than 40 airlines—22 scheduled and up to 23 nonscheduled charter lines, only six of which were United States flag carriers.

Mr. Halaby was succeeded as chief executive by William T. Seawell, a former Air Force general who appeared on his way toward reversing the airline’s decline until early last winter. He had managed to bring Pan Am’s operating costs more in line with revenue, and a small profit for 1973 was even expected after five years of losses.

Then a series of three events stopped the recovery effort.

Ballooning costs for fuel and other items were accompanied during the past 11 months by a dramatic decline in international travel, This was a result of many factors, but chiefly effects of fare increases imposed to offset higher fuel prices and a general malaise in this country that deterred many Americans from spending money on discretionary items like foreign travel.

In less than a year’s time, Pan Am, long respected as an air safety leader; experienced four fatal crashes, leading to a widely publicized Federal investigation and, inevitably, a loss of business.

Pan American trimmed its work force from a peak of 40,000 in 1969 to 36,100 when Mr. Seawell took over in 1972, to 32,500 at present. To save fuel and reduce operating costs, it eliminated service to 10 points in Eastern Europe, Scandinavia and other places but still serves 109 cities in 71 countries, colonies and territories.

It has taken other steps to cut costs, including negotiating with Trans World Airlines to consolidate some duplicative overseas routes. The negotiations ofundered when T.W.A. showed no great willingness to make concessions that would aid its weakened competitor.

Pan American was established in June, 1927, with a single airplane, a three‐engine Fokker F‐7 operating a 90‐mile run between Key West, Fla., and Havana. Today it operates 90,000 route miles, providing service to 17 cities in this country and over 100 in 77 foreign countries.

The company was organized with $200,000 in capital raised by Mr. Trippe’s classmate at Yale, Cornelius Vanderbilt Whitney. Charles A. Lindbergh was with the company, from its beginning until this spring, when he retired as a director. Mr. Lindbergh chartered Pan Am’s routes across both the Pacific and the Atlantic.

In its earliest years, the line was limited to Caribbean island‐hopping operations, but by 1935, after having established a string of Pacific weather stations, Pan Am was flying from San Francisco to Honolulu in 21 hours. It started Atlantic service in May; 1939, when its Yankee Clipper left Port Washington, L. L. and landed 26 hours later in Lisbon.

In addition to its worldwide air operations, Pan Am through its Intercontinental Hotel subsidiary operates 63 hotels in 52 countries, including several in Eastern, Europe.